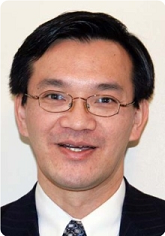 Tim Lau is currently a Senior Consultant and has been with IG Wealth Management since 2006. Tim moved to Edmonton in 1979 after graduating from Vancouver Community College with his Diploma in Computer Science to start his career with Alberta Government Telephones which is now TELUS. Tim held many positions with TELUS and completed his 23 year career with TELUS in 2002 as Manager of Infrastructure in the Information Technology department.

Tim’s second career was a stay at home dad to play a greater role in raising his daughters Danika and Vienna while his wife Tracey completed her MBA in International Business with a double degree from University of Alberta and Grenoble Ecole de Management in France.

After the family returned from France, Tim started his third career as a financial consultant with Investors Group now IG Wealth Management.

Tim was on the Parent Council at his daughter’s elementary school. Tim lead efforts to establish IG Wealth Management as a community partner in Strathcona County and this culminated in his office being recognized with the 2016 Community Service and Involvement Award by the Sherwood Park Chamber of Commerce.

Tim and his family have been active members of Ortona since 2007. Tim led sponsorship and fundraising efforts while Danika and Vienna were competitive gymnasts to provide financial support to those families who needed it. Tim also led committees which contributed to Ortona hosting successful Provincial and National Gymnastics competitions.

Tim joined the Go Community Centre Board in 2017 as an Ortona representative and is currently the Chair of the Sponsorship Committee.

‹ View All Board Members